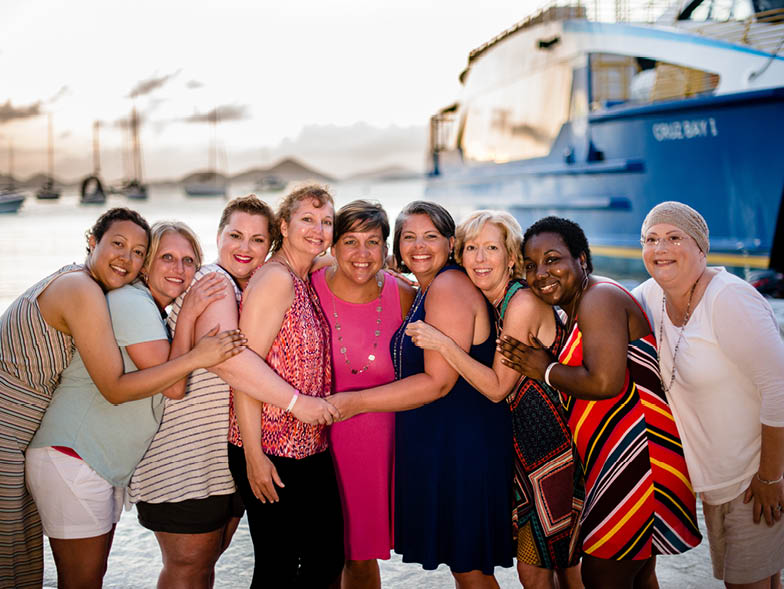 Jeanine Patten-Coble enjoyed vacationing at a North Carolina beach with her husband and son each year, and 2009 was no different—at first. However, the day before their trip, her doctor shared a shocking diagnosis: Patten-Coble had breast cancer.

Devastated but undaunted, she went on their scheduled family beach trip the next day. While running on the beach, mulling over how to tell her son about her cancer, she came across a compound of abandoned houses and found her new calling: creating vacation retreats for breast cancer patients and their families. The seeds for what would become the nonprofit organization Little Pink Houses of Hope were planted.

Patten-Coble spent the next year receiving treatment and having surgeries while laying the groundwork for Little Pink. From the beginning, she admittedly felt doubtful and eventually felt overwhelmed—especially since she had a full-time job in education and was devoting all her time to planning. Nonetheless, she soldiered on, and, in 2011, the first five Little Pink retreats were held, and she left her full-time job in education to focus on her true vocation two years later.

Since its inception, the organization has provided free weeklong getaways, from Costa Rica to California, to over 800 breast cancer patients and their families. In 2019, it has twenty retreats scheduled, each at a different location, and will serve over 200 families overall. Morning activities are offered, such as a beach day, a boat cruise, or riding ATVs, as are nighttime activities, from a family game night to a bonfire on the beach to stargazing, depending on the location. The families eat meals together as well for further bonding.

“People are desperately looking for similarity,” Patten-Coble explains. “They want others who empathize, who they don’t have to explain everything to. It’s a different story when you’re with people who get it. You can really talk about the experience in terms of how it’s impacting you instead of trying to make other people feel better that you’re sick, which is exhausting for a cancer patient. Our whole model is based on the idea of creating these organic environments of support. People at the retreats become friends, which leads to a much larger, deeper support network that’s meaningful long after the retreat. You come as strangers, and, at the end of the week, you leave as family. The commonality of cancer and shared experiences bonds people and strips differences away.”

It takes about nine months to plan a retreat. Each location, chosen not only for its locale but also for its community feel, has a local retreat coordinator, a retreat director, and a one-to-one ratio of volunteers and participant families. Houses are obtained in two ways: through word of mouth and, more often, by partnering with local property management companies, which can reach out directly to individuals who might be inclined to donate—simply because, as Patten-Coble says, they understand the difference they’re making in the lives of others. As a sign of gratitude, Little Pink requests off-peak weeks to minimize income loss, plus each homeowner gets a handwritten letter and photo from the family who stayed in his or her house.

Ultimately, Patten-Coble says, Little Pink retreats are about empowerment. “We use the word empowering a lot because, for a lot of families, their experience with this disease has been anything but,” she shares. “Their week truly empowers them to get back to who they are as a family unit because they experience brand-new fun things every day. We want cancer survivors and cancer patients to see themselves as thrivers and as people who, despite their diagnosis, have this new chapter that they’re in control of writing. They might not be in control of the ultimate progression of their disease, but they control how they live every day.”

And that includes teaching guests to celebrate every day and to grab every second possible out of life. Though she has countless stories of participants doing this, Patten-Coble says one still stands out from Little Pink’s first retreat. A woman named Shari was nervous about the group activity, paddleboarding, so they went out on the water together. To ease her worries, Patten-Coble told Shari that she didn’t even have to get up, but she insisted. Immediately, Shari’s two boys, eight and ten years old, started screaming from the shore at the top of their lungs, cheering on their mom.

“They were so full of joy and full of excitement. In that moment, Shari wasn’t a cancer patient. She was a rock star mom,” she remembers. “Shari turned to me and said, ‘This is why I had to do it. This is how I want my boys to remember me—it doesn’t matter what happens in your life; you still get up and try every single day. They’re going to need that lesson when I’m gone.’ Thinking of this still makes me cry, but it encompasses the joy we’re able to create, even when it’s mixed with pain. We have a chance to impact people. It’s about touching one heart and one life at a time.”

Understandably, choosing the families for the retreats can be a painstaking task, so the organization uses an assignment committee that reads through every application, first word to last; the members pored over 3,000 applications for 210 spots in 2018. People who are currently in treatment are top priority, and those selected choose the retreats they’d like to be considered for, which is often based on their treatment schedule, their kids’ school schedules, or proximity. Patten-Coble notes that Little Pink is especially mindful of geography, having started on the East Coast and expanding all the way to the West Coast: “Most of our expansion in 2019 is in the Midwest and the West, which is to help meet a need—lengthy travel is often very difficult for cancer patients, so the more locations we have spread across the country, the less time people have to travel.”

For her efforts, Patten-Coble was named a CNN Hero in 2017. The network raised money in her name, which allowed Little Pink to start a scholarship program for the children of families who have attended a past retreat. “I am a firm believer that family is for life,” she states. “We maintain relationships with our families long after their retreats. The scholarship is a way to remain a part of these kids’ lives long after their retreat and say, ‘You’re loved’ and to encourage them to always be the difference in the life of somebody else. Our hope is that they take it, get a great education, and, one day, pay it forward in some other way.”

Paying hope forward is what Jeanine Patten-Coble has been doing ever since taking a beach run the day after her breast cancer diagnosis. She has continued doing so by offering more retreat locations and penning her memoir, Struck by Hope. In the future, she plans to replicate the Little Pink Houses of Hope model for people with other types of cancers, such as ovarian, uterine, and lung cancers. “We’ve clearly seen how much people are willing to get involved, if given the chance,” she says. “We’ve become a great vehicle for people to use their gifts and talents in a way that’s truly meaningful. I have a front-row seat to the goodness in the world, and it’s why this model works. It’s simply about embracing people with a humongous hug during one of the worst times of their lives and bringing other people onboard to hug them. We’ll keep developing ways to give time, happiness, and hope to as many people as we possibly can.”

Every day, the average American will throw away nearly five pounds of trash and waste. And while it’s no secret that recycling plays a crucial role in keeping these materials out of the landfill, recycling also helps make products more affordable for both manufacturers and shoppers, reduces overall energy use, and cuts down on the greenhouse gases that are released into the environment.

But knowing the best way to dispose of something can be confusing. Should you trash it or recycle it?

Next time you’re staring at the trash bin wondering if that’s the best place for your soda can, remember the breakdown below to know which items go where.

Recycling Bin
Check with your town or waste-removal service to find out exactly what they accept. As a starting guide, the items below are commonly recyclable. Note: while aluminum foil is okay to put in the recycling bin, keep in mind that it is also easy to wipe clean. The greenest solution? Re-use it!

Trash Can
Believe it or not, casually tossing items into the recycle bin you are unsure about is actually worse for the environment than just throwing them away. For this reason, it’s important to know what can and can’t be recycled. Unfortunately, the following items are hard to recycle. Next time, try to use alternative materials and/or reusable items when you can.

Special Recycling Bin
Some businesses and government services accept these special items for disposal and recycling. Look for specially marked bins in your local area.

Looking for a way to say thank you to our military personnel? Shipping some homemade cookies to a troop is always a great way to show you care! However, since your cookies will be traveling long distances, there is some important information you need to know about how to bake and pack them so they survive the trip.